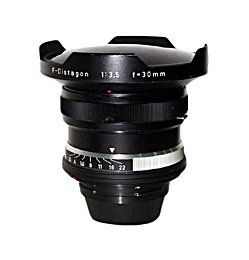 The lens was born with SL-66 in 1973 and it close focuses to 0 cm!! It has the same optical scheme as the contemporary Hasselblad version.
Note that the SL66 camera has a bellows focusing system on the body, actuated through rack-and-pinion moved front standard. So, this lens, as all the other Rollei medium format one has NO focusing helicoid.
The lens body separates in two parts to change filters, that are M24x0.5mm type.

Same lens, but named Opton F-Di Oberkochen. In the early 1970s West German Zeiss lenses when sold in the East Block adopted this name, to avoid copyright disputes with the East German Zeiss Jena. Eastern lenses were sold in the western bloc with the name “aus Jena” (From Jena)